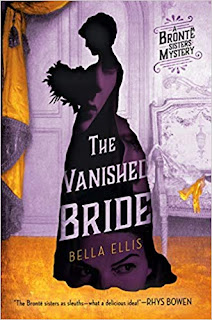 Physical book received in exhange for an honest review

Description from Goodreads:
Yorkshire, 1845. A young wife and mother has gone missing from her home, leaving behind two small children and a large pool of blood. Just a few miles away, a humble parson's daughters--the Brontë sisters--learn of the crime. Charlotte, Emily, and Anne Brontë are horrified and intrigued by the mysterious disappearance.

These three creative, energetic, and resourceful women quickly realize that they have all the skills required to make for excellent "lady detectors." Not yet published novelists, they have well-honed imaginations and are expert readers. And, as Charlotte remarks, "detecting is reading between the lines--it's seeing what is not there."

As they investigate, Charlotte, Emily, and Anne are confronted with a society that believes a woman's place is in the home, not scouring the countryside looking for clues. But nothing will stop the sisters from discovering what happened to the vanished bride, even as they find their own lives are in great peril...

My Review:
As some of you may know, I read a lot of cozy mysteries. I lead the cozy mystery book club at my Library.  So, I was really excited when Berkley Books (Penguin Random House) offered to let me read this book as part of the release tour.  And while this book is truly a love letter to the Bronte sisters, the actual mystery itself was a little disappointing.

So, the positives - each Bronte sister has her own distinct personality and watching them interact was not only fun and interesting, it made me want to go research them more on my own.  The author is obviously very familiar with both their lives and their works.  Seeing the relationship they had with their father and brother was also illuminating.  I loved that these smart, independent women would be brave enough to go out "detecting."

What I didn't love, as I said, was the mystery itself.  It was messy. There were a lot of bits and pieces and while some of it seemingly tied into how the sisters developed their published works later, which was an intriguing concept, there was just too much going on sometimes.  That was what led to me pretty much losing interest in the mystery itself. I honestly didn't care by about two-thirds of the way into the book what had happened to the young bride who disappeared.  Which... was about when things circled back around and I figured out what happened before the sisters did.

So, overall, I was not really impressed with this book as a mystery per se.  I did, however, thoroughly enjoy it as a piece of fictionalized history focusing on three famous women authors.  I would recommend it to anyone who enjoys the Bronte sisters' works, but if you purely want a cozy mystery, sadly, this would not be at the top of my recommendation list.
Posted by Jessica at 6:13 AM