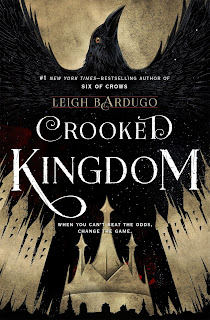 Description from Goodreads:
Welcome to the world of the Grisha.

Kaz Brekker and his crew of deadly outcasts have just pulled off a heist so daring even they didn't think they'd survive. But instead of divvying up a fat reward, they're right back to fighting for their lives.

Double-crossed and badly weakened, the crew is low on resources, allies, and hope. As powerful forces from around the world descend on Ketterdam to root out the secrets of the dangerous drug known as jurda parem, old rivals and new enemies emerge to challenge Kaz's cunning and test the team's fragile loyalties.

A war will be waged on the city's dark and twisting streets - a battle for revenge and redemption that will decide the fate of the Grisha world.

My Review:
So since this is the second book, I will attempt to be somewhat non-spoilery for anyone who hasn't read Six of Crows. For me, both of these books were absolutely stellar and I loved them much more than Bardugo's original Grishaverse trilogy.  Why? I happen to LOVE ragtag heist stories.  The Dregs, the six members that make up Kaz Brekker's newly formed "mini-gang" develop into a mini-family and though each is pretty flawed, they are all super interesting characters doing bad things for good reasons.  Even Kaz himself, though he would never, ever let on that he might be anything but the worst guy out there.  These characters have HEART.

And, though this is the Grishaverse and many people in this world have magical abilities, this group primarily relies on wit, stamina, sheer stubbornness, a hint of luck, and Kaz's ability to think eight steps ahead of anyone else. I LOVE that.  I felt as if the characters in these two books were more fully formed than the ones in the original trilogy.  They felt real.  Less caricature-ish (oh she's the good guy, oh he's the bad guy, oh he's the love interest)... here they were all a little bit of everything.  Even Ketterdam itself had a gritty personality.

This book, though the first also sucked me in immediately, was fast-paced and full of what felt like imminent danger around every corner.  There were almost no times that I wasn't sort of white knuckling the book and I haven't had one put me on edge like that in a while.  I was fully engaged from start to finish.  Fantastic and now I'm hoping that King of Scars will engage me the same way... and that Bardugo truly is working on a Six of Crows #3 to come sometime after that...
Posted by Jessica at 1:16 PM