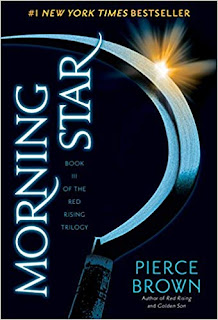 *SPOILER WARNING*
Description from Goodreads:
Darrow would have lived in peace, but his enemies brought him war. The Gold overlords demanded his obedience, hanged his wife, and enslaved his people. But Darrow is determined to fight back. Risking everything to transform himself and breach Gold society, Darrow has battled to survive the cutthroat rivalries that breed Society’s mightiest warriors, climbed the ranks, and waited patiently to unleash the revolution that will tear the hierarchy apart from within.

Finally, the time has come.

But devotion to honor and hunger for vengeance run deep on both sides. Darrow and his comrades-in-arms face powerful enemies without scruple or mercy. Among them are some Darrow once considered friends. To win, Darrow will need to inspire those shackled in darkness to break their chains, unmake the world their cruel masters have built, and claim a destiny too long denied—and too glorious to surrender.

My Review:
It's hard to write a review for book three in a trilogy without getting into spoilers, so I'm going to be somewhat brief.  This book, like all the other books in this series, is phenomenal. Brown is a master at weaving action, cunning politics, and brutal emotions into a storyline that just won't let the reader go.  This particular book had a lot of highs and lows and kept me on the edge through almost its entirety.  I've become so invested in these characters that their betrayals cut me to the bone, their deaths made me grieve, and the small joys they find had my heart singing.  The moments of triumph left me speechless in the best possible way.  I thought about this one for quite a while after I read it. It was the perfect end to the trilogy, but also I was super happy to know there are also more books going forward.  I highly recommend this series to adult science fiction fans, but with the caveat that there are language and brutally violent scenes so if you like the lighter-hearted variety (like Hitchhiker's Guide to the Galaxy) this series is NOT the one for you...
Posted by Jessica at 11:36 AM