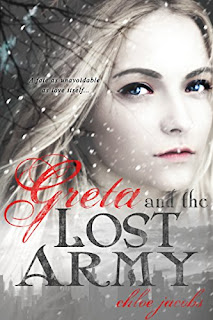 *Spoiler Alert as this is the final book in the trilogy!!*

Description from Goodreads:
A fate as unavoidable as love itself...

After spending the last four years trapped in a place of monsters, demons, and magick, the last thing the fierce teenage bounty hunter Greta expected was to ever be back on Earth. But a rare opportunity gives her and the Goblin King Isaac the opportunity to do just that. Now she’s home. With a boy in tow. And her parents have lots of questions.

Although Greta finally has her heart’s deepest wish—to see her family again—every step she takes to reconnect with them drives her further away from Isaac. Greta and Isaac planned for her to return to Mylena and become his queen, but she’s not sure if she can go back to that harsh world, though staying on Earth means giving up the boy she loves.

But a powerful enemy refuses to let Greta escape. A demon who will stop at nothing to destroy her and everything she loves. Even if it means following her to Earth and forcing her to face a fate as unavoidable as love itself.

My Review:
I'm going to try and be somewhat spoiler-free here, but again this is the last book in the trilogy, so some hints may be unavoidable as to what happened in the first two...

Anyway, this is not the first series, nor I'm sure will it be the last, where the main character finds themselves transported to a hostile world.  What I really enjoyed about this particular book in the series was that the author takes the main character, Greta, back to her home world and then lets both Greta and the reader come to the realization that Earth may no longer be the best place for her.  It explores both the joy and guilt associated with her homecoming.  The excitement and the bewilderment.  The horrible confliction that she now feels as she realizes there are things she truly loved about Mylena, even as she was working so hard to escape it.

I hadn't quite expected when I started this series to get so emotionally invested in it.  It seemed like it would just be a breezy, fun paranormal YA romance and I found it to be so much more by the time I finished it. The characters had depth and there was both action and romance that built in a believable way.  There was good world building and consequences to characters' actions and betrayals that moved the plot along well. As I said, I ended up really loving this series.  I was so happily surprised.

I think this is a trilogy that never got the buzz it deserved and is well worth a shot if you are looking for something new to read!
Posted by Jessica at 9:26 AM