Today, I am super excited to welcome the newly announced 2013 ABNA grand-prize winner, Rysa Walker, to the blog. I was so excited that the YA finalist entry won the whole shebang! 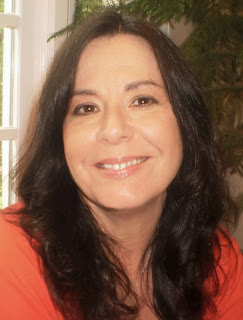 Author Bio:
RYSA WALKER grew up on a cattle ranch in the South. Her options for entertainment were talking to cows and reading books. (Occasionally, she would mix things up a bit and read books to cows.) On the rare occasion that she gained control of the television, she watched Star Trek and imagined living in the future, on distant planets, or at least in a town big enough to have a stop light.

When not writing, she teaches history and government in North Carolina, where she shares an office with her husband, who heroically pays the mortgage each month, and a golden retriever named Lucy. She still doesn't get control of the TV very often, thanks to two sports-obsessed kids. (Taken from Goodreads.com)

Some of you know that I help to judge the Amazon Breakthrough Novel Award each year.  This year, the format for announcing the winners changed.  With five finalists, one each in five different judging categories, only one of the finalists would be announced the grand prize winner. Though I did not personally judge her book, Timebound, for this year's competition, I was super excited when they announced that the YA book finalist had won the whole contest! Congrats to Rysa, it's an amazing accomplishment!

Rysa very graciously agreed to answer a few questions for me on the blog today and I couldn't be more excited to get to share more about her and her work here with you!

Hi, Jessica! Thanks for inviting me to chat with you at I Read to Relax.

1. How long did it take you, from first spark of idea to entering ABNA to write "Timebound?"

It was actually a long journey. My son, who will be ten in August, was toddling around in his Elmo slippers when I began writing Timebound. Given the day-to-day challenges of balancing teaching college and two small kids, however, the book was something that I played around with during my rare breaks between classes, and very little writing was actually accomplished until about two and a half years ago. Most of the first draft was written during the spring and summer of 2011, with editing and revision during the fall. I agent-shopped for about a year, before finally deciding to self-publish the book as Time's Twisted Arrow in October, 2012.

2. Since you've won, has your writing/life routine changed?

No major changes yet, because I'm still teaching a class at the University of Maryland's University College this summer. That will wrap up in a couple of weeks, however. After that class ends, I'll be stepping back from teaching to focus almost exclusively on my writing for the next year or so. That's the really great thing about winning the grand prize -- it's given me the flexibility to work on the next books in series this year without having to worry about how bills, including my gargantuan student loans, will be paid.

3. Any advice for aspiring authors out there?

First, believe in yourself, and don't stop knocking on doors just because they keep getting slammed in your face, as they almost certainly will. If you persevere and work hard, one of those doors will be the right one. And if the right door doesn't open, carve one out for yourself. Second, don't stop writing. Whether you set aside certain hours each day to write or, as was the case for me, are often unable to write for days on end, don't stash the manuscript in some folder you never see. Leave it out on your desktop as a visual reminder that there's something you'd rather be doing. If it's out there and visible, odds are good that your imagination will keep working on the idea even during the stretches when your fingers are otherwise occupied.

4. If you could write a book under a pseudonym that no one would ever connect to you, are there any genres you would love to secretly explore?

Hmm. I already write under a pseudonym because no one can spell my actual last name! I'm not sure there are any genres I'd want to explore that would require absolute secrecy -- I don't have a secret desire to write the next Fifty Shades of Gray. The ideas I have for other works are all pretty solidly in the science fiction or fantasy genre. That's what I tend to read today, and really what I've always gravitated toward even as a teen.

5. If you could cross one thing off your bucket list tomorrow, what would it be?

Having one of my books on the New York Times Bestseller List. That's not something that can happen tomorrow, given that Timebound doesn't debut until October 22nd, but I think the series is in excellent hands with Skyscape and Amazon, so maybe it's not outside the range of the possible for the near future. :)

Thanks again for having me on I Read to Relax. Happy reading!
Rysa

Rysa, thank YOU for taking the time out of your schedule to stop by!

Timebound:
When Kate Pierce-Keller’s grandmother gives her a strange blue medallion and speaks of time travel, sixteen-year-old Kate assumes she’s delusional. But it all becomes horrifyingly real when an assassination in the past destroys the foundation of Kate’s present-day life. Suddenly, that medallion is the only thing protecting Kate from ceasing to exist.

Kate learns that the 1893 murder is part of something much more sinister—the plans of a cult leader hell-bent on annihilating all dissenters—and Kate’s genetic ability to time-travel makes her the only one who can stop him. Risking everything, she travels to the Chicago World’s Fair to prevent the killing and bring down the cult.

Changing the time line comes with a personal cost: if Kate succeeds, the boy she loves will have no memory of her existence. And she wonders—regardless of her motives, does she have the right to manipulate the fate of the entire world?