As you all know, when I LURVE a book, I give it a Gold Star Review here. Well, I was thinking of ways to liven up the blog a bit and had one of those fabulous epiphanies... I'm going to start, or at  least attempt, to interview the author of each book that receives a coveted Gold Star! I hope you'll enjoy these quick, little interviews.  :D

To kick things off, I'm so happy to host Deva Fagan, author of the fantastic CIRCUS GALACTICUS! You can find my original Gold Star Review here. 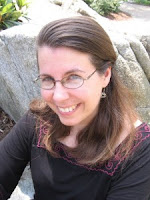 Welcome, Deva!  Thank you so much for stopping by to chat with me.  I have just a couple of quick questions for you:

1. How long did it take you, from first spark of idea to final proofs, to write Circus Galacticus?

The first spark of idea actually came back in *rummages through journal archives* 2005 (!) when I wrote a draft of an entirely different book about a circus in space. While the core idea was the same (misfits forming a circus and traveling around the universe) it had an entirely different plot and cast of characters (for example, the Ringmaster was an elderly lush, and the main character was a girl who trained a pack of alien dogs). It was also a lot grittier, and written as adult science fiction. I really liked the idea, but it never really came together, so I set it aside.

It wasn't until the fall of 2008 that I came back to that core idea and had the notion to try reworking it with teenage protagonists. That was when the spark really turned into a bonfire, and I quickly wrote what would become CIRCUS GALACTICUS. It sold in the fall of 2009, and was published in November 2011.

It just goes to show that sometimes you just have to be patient with some ideas you love!


2. If you could write a book under a pseudonym that no one would ever connect to you, are there any genres you would love to secretly explore?

I'm actually working on a project right now that's a new direction for me. It's a character-driven YA fantasy, with a strong romantic element, and more of a serious, epic plot than my first three books, which are more light, humorous reads for slightly younger audiences.

It's been a very challenging project, but I've really enjoyed pushing myself to do something new! Especially as it's more in the vein of the types of books I loved best as a girl, like Robin McKinley's THE HERO AND THE CROWN, Meredith Ann Pierce's DARKANGEL, and Cynthia Voigt's JACKAROO.

3. I appreciate that Circus Galacticus wrapped Trix’s story up in one book, but I loved the characters and the Big Top so much…would you ever consider writing another book set in the same world?

Oh, it would be a dream-come-true to be able to tell the rest of Trix's story! I love these characters too, and would be thrilled to share more of their adventures, secrets, and ultimate destinies. Alas, publishing is a business, and so far the first book has not sold enough copies for the publisher to consider a sequel at this time.

There's a paperback edition of CIRCUS GALACTICUS on the way November 6th, 2012, though, so keep your fingers crossed that it finds more new readers, and we'll see what happens!

*ooh! I'll have to make sure to pick up a copy in pb to help those sales! Maybe even two...one for a giveaway perhaps??*

4. If you could cross one thing off your bucket list tomorrow, what would it be?

I'd say "Visiting New Zealand and Australia" but it's already tomorrow there, so that might cause some sort of time-paradox!

Oops, I already answered this above! So instead I'll tell you one of my favorite non-fantasy books, that I did NOT read as a kid, but wish I had: the Betsy-Tacy series by Maud Hart Lovelace. If you are a fan of Anne of Green Gables (like me!) you should most definitely check these out. They're based on the real life of the author, growing up in the early 1900s in Minnesota. They are all wonderful, but I especially love the high school era books, starting with HEAVEN TO BETSY.

Any of my Threadless T-shirts (http://www.threadless.com)!


Thank you Jessica, for having me stop by!
Cheers,
Deva

Thank YOU, Deva, for letting me interview you. It was a pleasure!

For more information about Deva and her books, check out her website at http://devafagan.com/