ARC Review - The Art of Theft by Sherry Thomas 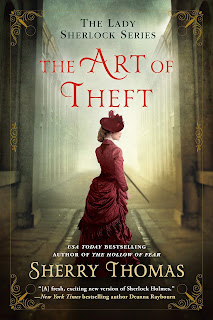 Description from Goodreads:
As "Sherlock Holmes, consulting detective," Charlotte Holmes has solved murders and found missing individuals. But she has never stolen a priceless artwork—or rather, made away with the secrets hidden behind a much-coveted canvas.

But Mrs. Watson is desperate to help her old friend recover those secrets and Charlotte finds herself involved in a fever-paced scheme to infiltrate a glamorous Yuletide ball where the painting is one handshake away from being sold and the secrets a bare breath from exposure.

Her dear friend Lord Ingram, her sister Livia, Livia's admirer Stephen Marbleton—everyone pitches in to help and everyone has a grand time. But nothing about this adventure is what it seems and disaster is biding time on the grounds of a glittering French chateau, waiting only for Charlotte to make a single mistake...

My Review:
As some of you know I read a lot of cozy mysteries for both work and fun and I LOVE a good historical mystery. I'd been intrigued by this series for a while, after hearing amazing things about author Sherry Thomas's skill as a writer. I also love the imagined twist on the character Sherlock Holmes.  So, when given the opportunity to read The Art of Theft, I couldn't pass it up, even though it is book four in the series.

As such, my review will be more of a teasing spotlight, as like I will recommend to you, I intend to go back and start this series properly with book one, A Study in Scarlet Women. The writing in this series is wonderful, full of rich historical detail, flirtations with "current events" of the time and character development that leaves no character as simply a caricature of themselves. The mystery unfolds well, and though I've heard it is not the most exciting in the series, I thoroughly enjoyed it.  I did feel as though I were missing pieces of the characters' interactions with each other, though, having not read the previous books. This is a series that truly should be read in order.

So, book one is highly recommended for readers who enjoy a good historical mystery and like the idea of a female behind the incredible mind of the infamous Sherlock Holmes.
Posted by Jessica at 11:51 AM No comments: