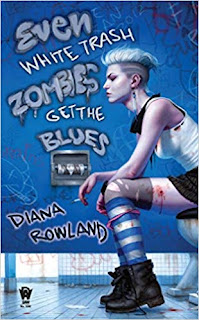 Description from Goodreads:
Angel Crawford is finally starting to get used to life as a brain-eating zombie, but her problems are far from over. Her felony record is coming back to haunt her, more zombie hunters are popping up, and she’s beginning to wonder if her hunky cop-boyfriend is involved with the zombie mafia. Yeah, that’s right—the zombie mafia.

Throw in a secret lab and a lot of conspiracy, and Angel’s going to need all of her brainpower—and maybe a brain smoothie as well—in order to get through it without falling apart.

My Review:
This series is funny and so very, surprisingly heartfelt. I originally picked up a book in the series (out of order) because I'd been assigned to review it. I'd seen the cover for the first one and thought it was amazing, but never got around to reading it.  Well, after I read one book in the series and LOVED it, I was good and hooked. I finally went back and started the series from the beginning and I'm now completely caught up and hoping there will be more books...

Anyway, this is book two in the series and *spoiler alert* Angel is getting somewhat used to being a zombie.  Unfortunately, her new boyfriend may or may not be part of the Zombie Mafia, and there some other weird crap going on.  Needless to say, as a zombie book lover, this whole concept is great, but it's also AMAZING how Angel is like the worst human being, but grows to become such a stellar person...as a zombie.  There is a huge amount of character growth in each book and I love watching her come to stand on her own feet and kick some butt along the way.

This book was funny and touching and I couldn't stop smiling as I hit the end of the book. I also immediately wanted to move onto book three. I'll also mention that I LOVE the narration of the audiobooks for this series.  The reader does an amazing job with accents and diction that gives very distinct tones to each character and makes the listening experience wild. As I said, I've now read all six books and not only do I want more, but I would happily re-listen to any book in this series if I had the free time.
Posted by Jessica at 12:29 PM