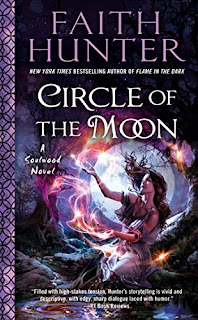 Description from Goodreads:
Nell can draw magic from the land around her, and lately she's been using it to help the Psy-Law Enforcement Division, which solves paranormal crimes. Joining the team at PsyLED has allowed her to learn more about her powers and the world she always shunned--and to find true friends.

Head agent Rick LaFleur shifts into a panther when the moon calls him, but this time, something has gone wrong. Rick calls Nell from a riverbank--he's naked, with no memory of how he came to be there, and there's a dead black cat, sacrificed in a witch circle and killed by black magic, lying next to him.

Then more animals turn up dead, and team rushes to investigate. A blood-witch is out to kill. But when it seems as if their leader is involved in the crime, the bonds that hold the team together could shatter at any moment.

My Review:
This is book four of the series, so I'm going to try not to be spoilery in terms of plot.

Nell Ingram, our main character, is a woman who was raised in a religious, polygamous cult and only now has her own lands and home because both her childhood husband and his previous wife have passed.  As supernatural occurences happen near her lands, Nell becomes involved with the PsyLED team and eventually trains and becomes a full-fledged member with their branch of the government.

Nell is a woman who has experienced hardships and mistreatment, but has also experienced care and loyalty.  What she finds with the PsyLED team is a new focus, challenges, friendship, and maybe more.  The team is awesome and the world-building in this series (based off of the Jane Yellowrock world) is phenomenal.  I love seeing Nell navigate her way through things with grit and integrity.

For those of you who are audiobook listeners, let me tell you this series is an AMAZING listen, too.  The narrator, Khristine Hvam, does a fabulous job bringing out Nell's churchwoman accent and defining the other characters. I love listening to the books in this series.

Book one in this series, Blood of the Earth, is highly recommended to anyone who enjoys urban fantasy, paranormal romance, and stories about strong women finding their way.
Posted by Jessica at 8:13 AM