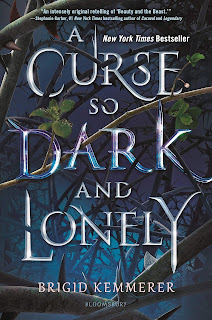 Description from Goodreads:
Fall in love, break the curse. It once seemed so easy to Prince Rhen, the heir to Emberfall. Cursed by a powerful enchantress to repeat the autumn of his eighteenth year over and over, he knew he could be saved if a girl fell for him. But that was before he learned that at the end of each autumn, he would turn into a vicious beast hell-bent on destruction. That was before he destroyed his castle, his family, and every last shred of hope.

Nothing has ever been easy for Harper Lacy. With her father long gone, her mother dying, and her brother barely holding their family together while constantly underestimating her because of her cerebral palsy, she learned to be tough enough to survive. But when she tries to save someone else on the streets of Washington, DC, she's instead somehow sucked into Rhen's cursed world.

Break the curse, save the kingdom. A prince? A monster? A curse? Harper doesn't know where she is or what to believe. But as she spends time with Rhen in this enchanted land, she begins to understand what's at stake. And as Rhen realizes Harper is not just another girl to charm, his hope comes flooding back. But powerful forces are standing against Emberfall . . . and it will take more than a broken curse to save Harper, Rhen, and his people from utter ruin.

My Review:
This was one of those times I kicked myself for not reading a book sooner! I had this book for nine months before I sat down to read it, and I did so because the buzz got SO huge, I couldn't take it anymore... and I get why.  This is a STELLAR Beauty and the Beast retelling.

The re-imagining of how the curse worked was so well done and my heart broke for Rhen (the Prince) and what he went through over the decades that he battled the curse.  The true friendship that developed between Rhen and Captain Grey (my favorite character, for sure!) was steadfast and inspiring.  The friendship that develops between Grey and Harper, our heroine, plucked at all my heartstrings.

And Harper, if I could have created a heroine that I would root for until the very end, it is HER.  She has cerebral palsy, but never, ever lets it stop her from achieving her goals. She is smart. She is a fighter.  She is brave, and loyal, and so kind.  This is the "Belle" that modern girls can follow.

If you like fairytale retellings at all, give this one a shot. Please.  I CANNOT wait for book two, A Heart So Fierce and Broken.
Posted by Jessica at 6:06 AM

Email ThisBlogThis!Share to TwitterShare to FacebookShare to Pinterest
Labels: 2019 5 star read, 2019 Books I Already Own Challenge, A Curse so Dark and Lonely, Beauty and the Beast, Brigid Kemmerer, fairy tale retellings, fairytales