So, I decided to try and review my BEA books in some kind of order that actually made a little sense... both to me and hopefully to all of you! Since I've covered my picture books, now, I'm trying to cover the early reader and middle grade books that I received at BEA.  Then, soon, we'll move on to more of the YA and adult titles. Enjoy! 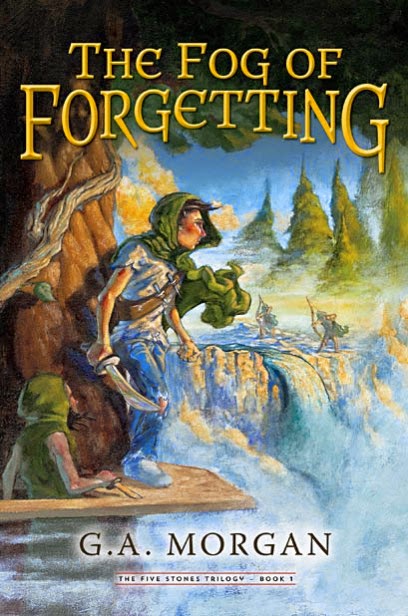 The Fog of Forgetting
by G. A. Morgan

Sneaking out for a quick boat ride on a summer day, five children find themselves engulfed in a curtain of dense, powerful fog that transports them from the rocky Maine coast to the mysterious island of Ayda. Rescued by Seaborne, a machete-toting wayfarer of few words, the children suddenly find themselves at the center of a centuries-old battle between Dankar, the ruler of Exor, and three siblings that rule the other realms of Ayda. At stake are the four stones of power and the elusive Fifth Stone that binds them all.

When 9-year-old Frankie is kidnapped by Dankar, her older sister Evelyn and the three Thompson brothers must learn to harness the powers of the daylights, ancient forces of earth, fire, water, and air, to navigate their way through the realms of Ayda, rescue her, and find a way home. (Description from Goodreads.com)


This is the great start to an interesting new middle grade epic fantasy series. The main characters are siblings from two families, a little reminiscent of the Chronicles of Narnia.  What I really liked about this book, similarly to Lewis' or even Pullman's  His Dark Materials trilogy was how the children were definitely children and sounded authentically youthful and yet were also able to understand and define more adult concepts.  Something that we often, in real life, do not give children credit for being able to do for themselves.  We forget how strongly grief can affect anyone no matter the age, and how insightful and intuitive children can be as they observe the world around them.

Thrust into a world full of dangers and new rules that they had not previously known, the children band even more strongly together.Even in the face of the worst sorts of danger, they are willing to stand up for each other, willing to throw themselves in front of man or beast to save one another.  These are some brave and compassionate kids.  Reading as they discover new wonders about the world they're now in and each other was a pleasure fitted neatly into a story that kept me on my toes.

I look forward to seeing where book two takes us!

Full disclosure: Received from publisher at BEA 2014
Posted by Jessica at 11:17 AM